With the introduction of the Common Core State Standards (CCSS), educators are faced with new challenges for curriculum development and lesson planning. Two states, New York (engageny.org) and Oregon (ode.state.or.us), captured the essence of the challenges in their “Common Core Shifts” in English language arts (ELA)/literacy and in mathematics documents. There are six ELA shifts, toward

The shifts propose not only new classroom instructional methods for ELA, but also new curriculum materials that cross skills areas. For example, the CCSS ELA shift toward a 50/50 split between information and literary texts along with the shift toward writing from sources will require new materials that assist instructors in helping all learners achieve the standards.

Native English-speaking students and ELs alike will be expected to write from sources, and the emphasis of their writing must provide evidence “to inform and/or make an argument.” The CCSS state that “Writing argument involves responding to ideas, events, facts, and arguments presented in the texts they listen to or read.” (p.24).  Two key CCSS Anchor Standards best describe the shift to more complex writing tasks that are meant to prepare all students for college and career readiness. These are:

For ELs with limited academic language skills in English, the challenges of these new standards are daunting. Writing from sources, providing evidence, and focusing on argument, rather than narrative or reporting information will take carefully crafted instruction, instructional materials, and guidance for mainstream teachers and ELD teachers alike.

At the elementary through middle school levels, writing from sources and providing evidence has previously focused on creating a compare/contrast essay. Compare/contrast essays were developed on observations of two, and sometimes three, objects, events, characters, historical figures, and so forth, and required the writer to observe, list, and order important facts. Students generated lists in pairs, cooperative groups, or whole group instruction, placing information on graphic organizers, such as two and three intersecting circle Venn diagrams. Students were then asked to find what would be considered a similarity between the individual items and list them appropriately in the overlapping oval on a Venn diagram. Synthesis of information did not go as far as persuading the reader of stronger or weaker evidence, nor was an argument presented supporting one item with facts and evidence.

Moving from compare/contrast to persuasion and argument requires students to engage in higher order thinking skills, particularly analysis and synthesis. Although students often practice persuasion in their daily lives (through bribery, flattery, or reverse psychology, as Clark suggests in “Should We Let the Pigeon Stay Up Late?”; 2014), they are not frequently asked to analyze the elements of persuasion, nor practice persuasive writing. Persuasive writing begins with a thesis statement, the topic of which should be realistic and of importance to students. Students need to list and describe reasons to support the thesis statement. Each reason should be supported with facts or specific examples. The conclusion should support the thesis statement and bring together the supporting facts and evidence.

Providing English learners with mentor texts could be used as models of well-written examples of persuasive writing.  Authentic children’s literature, particularly picture books can provide excellent examples of how to write persuasively, as well as provide visuals to support the aspects of persuasion for entering, emerging through developing English language levels (Level descriptors from TESOL’s PreK-12 English Language Proficiency Standards, 2006). Brandi Clark in Should We Let the Pigeon Stay Up Late? indicates that “writing inspiration often comes from reading great books”…and…”for young students picture books provide such inspiration ” (p 73). From simple stories, such as the Pigeon book series, as suggested by Clark, to the wolf’s version of facts in  The True Story of the 3 Little Pigs (1989), to a sophisticated  Martin’s Big Word: The Life of Dr. Martin Luther King, Jr.(2007), teaching persuasion can be differentiated for different levels of English learners with carefully crafted language and illustrations in picture books.

Writing to argue, often combined with persuasive writing strategies, goes one step further when it requires evidence, provable and factual. Additionally, writing involving argument often requires synthesis of research points. Stating the situation or problem is introduced in a series of facts supporting a point of view and rebuttals to the author’s stand on a topic. A conclusion is required, synthesizing the author’s evidence to support the author’s solution to the situation.

Ferlazzo and Hull-Sypnieski (2014) in “Teaching Argument Writing to ELLs” talk about three aspects of argument: ethos (reputation, credibility), logos(reasoning, facts, and statistics), and pathos (emotions). They suggest, and I agree, teaching the vocabulary for these three aspects is key to understanding how to draft an argument. Creating visuals for ethos, logos, and pathos, and all their possible synonyms, grounds ELs’ understanding of the terminology into visual, as well as verbal understanding.

Although the authors present how to teach argument to advanced (bridging) ELs, I believe that using picture books as mentor texts for the entering through developing EL levels helps these ELs approach, if not meet, the writing standard by modeling argument in simplified sentence structures and with visual support.

I suggest that a picture book, such as The Day the Crayons Quit (2013) by Drew Daywalt presents all three aspects of argument: ethos, logos, and pathos. Duncan, the main character and owner of the box of crayons, discovers a stack of letters, one from each of his crayons, explaining why they wish to quit coloring. For example, the red crayon explains that he works harder than any of the other crayons in the box because there are more things that require the use of red, including fire engines, apples, strawberries, and everything Christmas. Using both pathos (emotions) and logos (reasoning, facts, and statistics), the red crayon creates a credible argument for being overworked and needing a rest. On the other hand, the white crayon writes that he is hardly ever seen on the page (reasoning and facts) unless black outlines are used. White further states he feels “empty” (logos and pathos). In addition, the gray crayon tells Duncan, “you’re killing me!” He explains that elephants, rhinos, hippos, and humpback whales are such big animals, and he gets really tired (pathos). The gray crayon suggests coloring tiny rocks; pebbles and baby penguins would give him a break once in a while (logos).

Analyzing argument with the use of graphic organizers, such as a three-column chart or a three-circle Venn diagram, helps students understand the writer’s craft and provides examples of both language structures and vocabulary usage in preparation for writing argument. Thus a simple text provides, through simple language and visuals, a way to model argument writing to ELs from starting through developing levels. 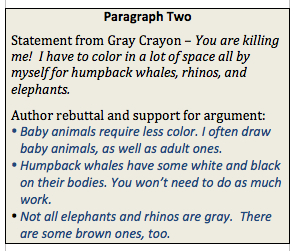 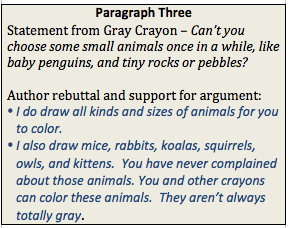 Practicing both persuasive and argument writing for ELs at lower levels of English language development requires the teacher to model how to use phrases as sentence starters and/or sentence frames, such as “in fact,” “for example,” “with the result that,” or “for this reason.” For entering and emerging ELs, visually representing argument with single sentences, structured with sentence frames or sentence starters, can be a way that students at these levels approach and meet the CCSS writing standard.

At the developing, expanding, and bridging levels, ELLs in Grades 3–8 can also use picture book models for argument writing. Consider a picture book like Ish (2004), by Peter H. Reynolds. This book is about Ramon, a budding artist who loves to draw until his brother makes a thoughtless remark about his drawings. The story then revolves around Ramon’s struggles to draw in light of the thoughtless remark and loss of joy in creating. His sister has been saving all the drawings he throws in the trash and tells Ramon that one drawing of a tree, for example, is “tree-ish.”

ELD teachers have here, in simplified language and visuals, a parable that can be used as a jumping off point for both persuasive and argument writing. How can remarks stifle creativity? What is art? How do you know that your work is creative? Working in mixed language level cooperative groups, students can go beyond responding to these questions and research, with teacher guidance, both the aspects of the creative process and what stifles creative expression.

ELs can approach and meet the CCSS Anchor Writing Standards using well-crafted picture books as both examples and prompts during close reading and oral discussion. Instructors and materials writers can further mine these materials by developing and employing structured response organizers, including sentence starters and sentence frames, and providing multiple opportunities to work both collaboratively and independently with the text.

Judith B. O'Loughlin, an independent education consultant, has 25 years experience as an English, ESL, and special education teacher. She taught ESL at K–12, adult education, and graduate levels in university endorsement programs. She is the author of the Academic Language Accelerator and chapters in TESOL and Corwin texts on teaching English language arts and mathematics to ELLs.